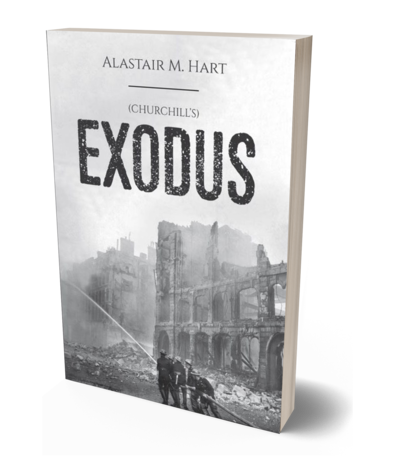 EXODUS
Alastair M.Hart
World War II is entering a pivotal stage. Germany’s dark influence is spreading across Europe and the grim storm cloud is swirling around the horizon of Britain. From the bleak sky death falls in the form of bombs. They crash down into the cities of Britain and shatter the idea of the war being fought on a distant shore. It has reached Britain, and the people feel vulnerable. While the government wants to create a film to harden the people’s resolve, the victims of the bombings have other ideas. As long as they have the chance they seek to escape the borders, fleeing all around the world in order to preserve their families and their sanity. Their intentions are good, but they’re seen as treasonous. Everyone has their reasons for fighting, it’s just that some are fighting for their families rather than their country. Will the British government be able to hold their people together, or will their resolve crumble in the face of the domineering German war machine?
Amazon.co.uk
Amazon.com